“Clyde” a nice Del Gesu’ violin copy that I recently made found it’s new home with a nice teenage boy. He is a very talented and humble young man. I can honestly say I feel very thankful I get to watch the partnership grow with time. Here are a few photos of the finished product. 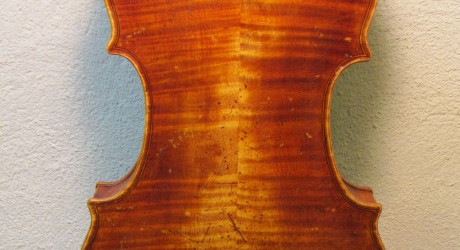 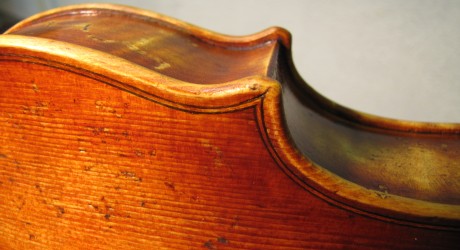 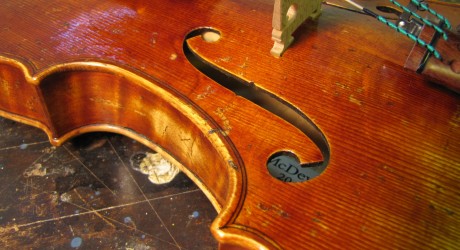 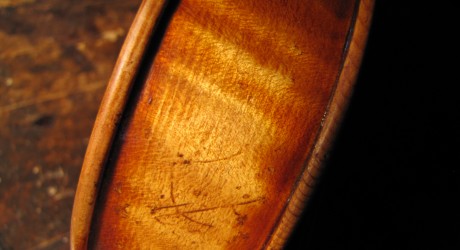 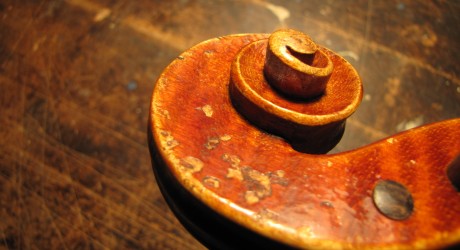 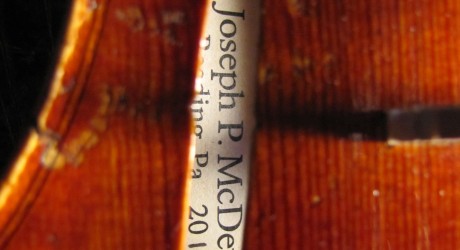 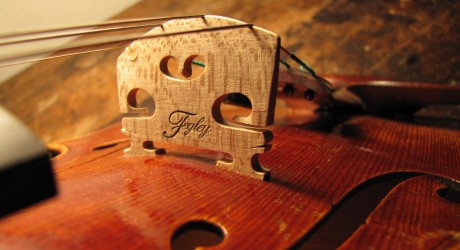 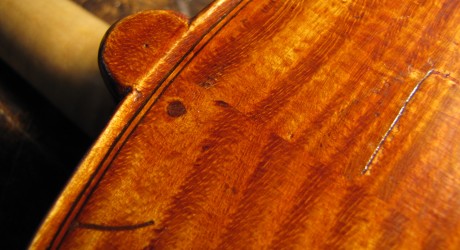 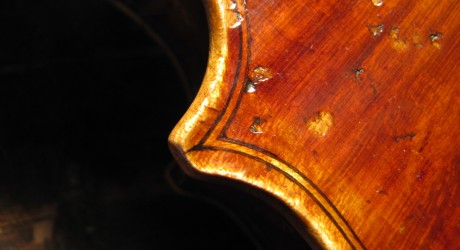 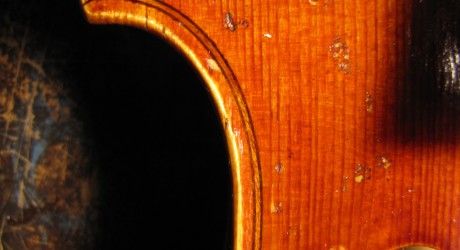 The amount of steps I go through in order to complete one small step in the making process drives me crazy sometimes! Crazy I tell you! It’s one small step after the next and if the previous step wasn’t executed properly then it will have a ripple effect throwing each step off the slightest bit. So this is why I like to make in my studio at home.
Music in the background helps but proper lighting and a sharp knife will do the trick. Measure 5,000 times and cut once. It never hurts to take a break to let your eyes rest and before coming back to work.

These f-holes are for a Stradivari violin that I am currently making. 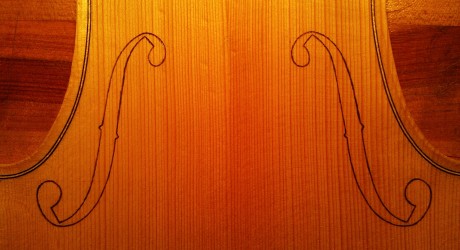 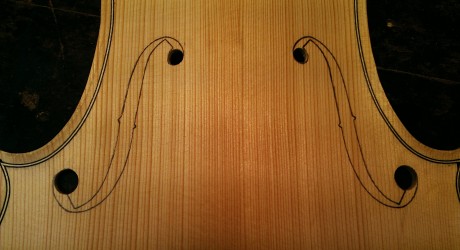 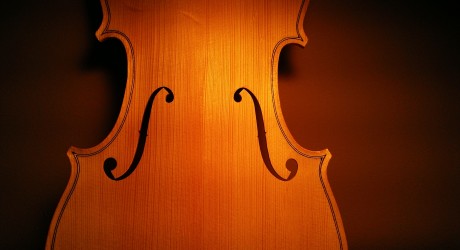 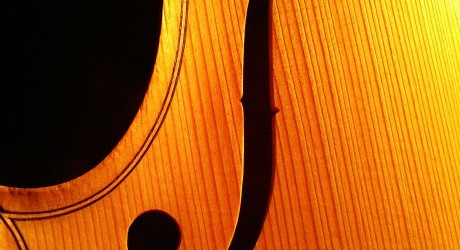 A modern Cremona instrument made in 2003, this Trabucchi really has a brilliant look with a very wide flamed, one-piece back. Not your average modern Italian maker who would focus more on a tight, narrow flamed maple for the back of the instrument.

Trabucchi’s work boasts the knowledge and skill from years of experience as a maker in Italy. Notice how strong the outline of this instrument looks, it is almost masculine in a way that the edges were left so refined and bold.

This violin has a great even tone and is a fine example of a modern Italian masters work. 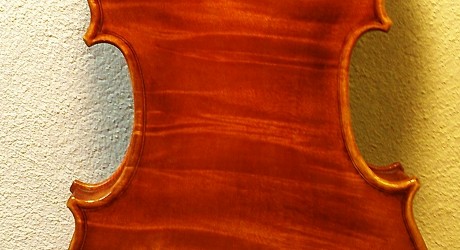 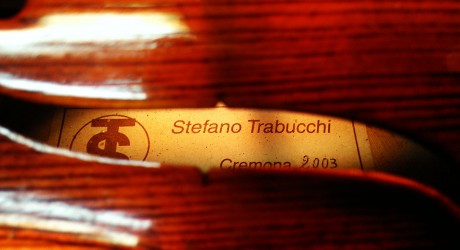 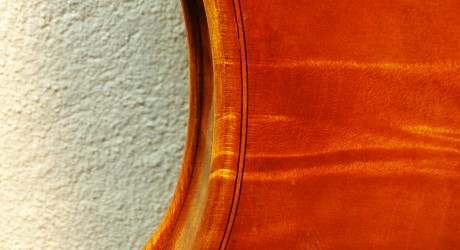 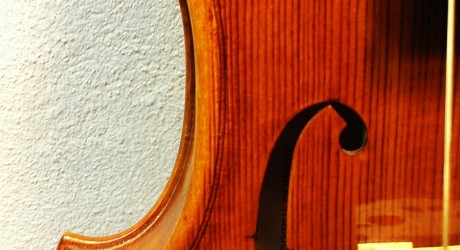 I don’t blog nearly enough… I hate to admit that it is hard for me to sit in front of my computer when I see my workbench and tools right next to it waiting for the next project! I will try to be better about taking the time to write about some of the fine instruments I have collected so far, key word there is try! So don’t be too hard on me.
Although I am a great fan of fine older instruments I am a realist, not all of us can afford the luxury of a million dollar Stradivari so most of us start with fine copies by modern makers.
One of the better modern Violas I have come across is a Stanley Kiernoziak made in Chicago in 2005. Kiernoziak studied in Poland.

He is known for being very successful with his violas making for the William Harris Lee Company; his number of violas made far exceeds violins and cellos, smart man! Everyone loves a modern viola! Kiernoziak’s instruments are known for their strong projection and warm tonal qualities.

So much so that he was awarded a VSA certificate for tone in the quartet competition. I have seen Kiernoiak’s viola sell for over $17,000. This particular Stanley Kiernoziak viola is a 16” and is one of my favorite modern violas I have in the shop right now, as a maker it is refreshing to find inspiration in a modern instrument.

Make an appointment to stop in and play it! 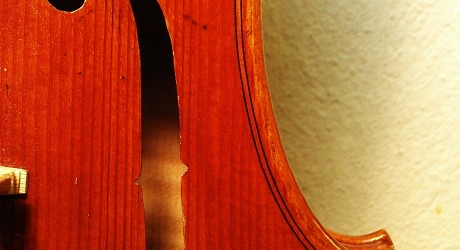 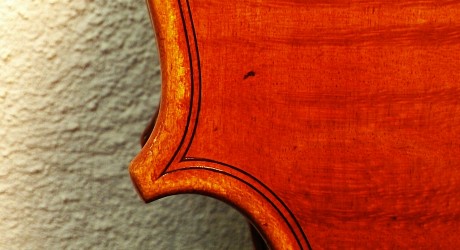 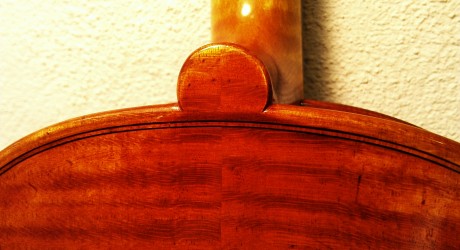 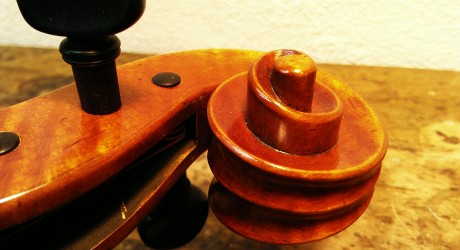 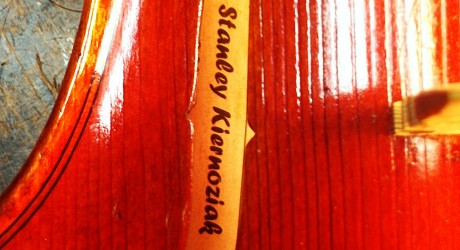