Collin-Mezin was the son of Charles J.B. Collin dit Mezin pere. His father was originally from Mirecourt but established himself in Paris and trained his son Collin-Mezin took over the family workshop after his father’s death in 1923.

Charles J.B. Collin was one of the leading French makers of the 19th century, Joseph Joachim played on one of his violins. He also won medals at three Paris competitions.

He generally made Amati, Guarneri and Stradivari models. He was also a bow maker. Collin-Mezin was fortunate enough to train under his father; most of his instruments were made for his father and followed his model.

Eventually he took on a more personal style of his own. This is a fine example of Collin-Mezin fils work. He lived from 1870-1934. 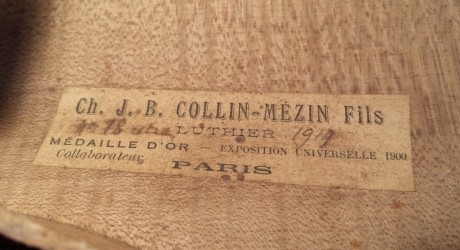